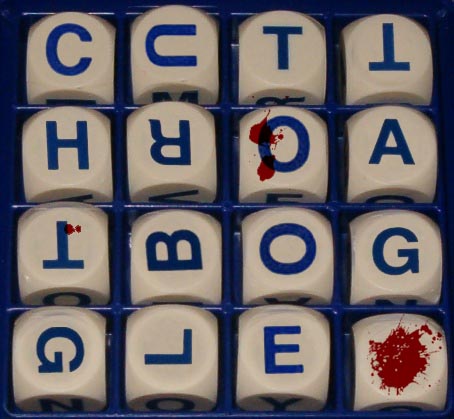 First off, why do you guys hate Nibbs so much? Shawn! Hugs! Stat! Second, thanks to Melissa for beta-testing some stuff.

Gilman was the most unique player this round, as none of his answers were duplicated by his opponents. Eight of you advance to the winner’s bracket and the other eight head to the loser’s bracket. Open the spreadsheet link right below if you want to look column by column suspensefully, otherwise head past the jump for the run down. Details of every word played inside!

Sorry it took so long, but there were a couple stragglers and this was a bitch to score timewise. It was fun though seeing what you came up with.

There is your top six! Who else advanced? Well, I know I said the next two highest scorers, but considering Gilman had to back out, Group A had their scores skewed higher with there being no zeroes assigned. So I compared Novak, Toadashy, AMR and Melissa against each other.

Congrats guys and girls. Hopefully that wasn’t too much of a headache. Let me know of any way I can make round two better. I am thinking of cutting it down to two boards. I am also not sure that the turn-tile was very worthwhile. You guys sure slammed Pete with it though! Only 12 Turn-tiles were used, and 6 of them were against Pete, by four different opponents! He showed you I guess.

If there is anything you should take away from the first round, is that you better have a balanced attack on the categories or you could miss out. Melissa and Todashy dominated on standard scoring, but didn’t give enough attention to the other two categories and it hurt.

Even if you only throw an answer or two in the other two categories, that could mean a one or two place difference in the rankings for that category. Hell, blackout you could have just copy/pasted your entire standard word list and wound up with a blackout in x amount of moves which may have beat an opponent who couldn’t use all 16 letters. I’ll put that partly on me for clarifying in the Round 1 email, but not updating the post.

Congrats to Spooks on being the only one to find update. I didn’t expect anyone to get ‘dulcet’ really.

I look forward to your input & questions, so we can get Round 2 started.