Sorry it took so long, but man it just did. I’m sure the judges put in 40-60 minutes each, and I put in a good hour after they were done, but I was too tired to finish compiling and write a summary post last night. Who was the idiot who thought Scattergories would be less time consuming than Pyramid?

I learned about several words I hadn’t known before. I learned some of you still are bad at reading directions, one of you can’t read at all.  I learned animals are still evolving after all these years. I learned a lot of you should never be allowed to feed your children.

Speaking of hungry children, here are those results you’ve been crying for…

The only nail biter was in group 3 and man was that close.

Because…spreadsheets! (there’s a Key at the bottom of each worksheet, you may have to scroll)  https://docs.google.com/spreadsheet/ccc?key=0AoZ5pH2eA1q1dGhITHZVdnoxaXFBWDc3YldpaHFicGc&usp=sharing

Kelly, Novak, Dean, Greekhouse, AMR, Beau, , Margaret and Rhubarb will advance to the next round.  Melissa gets the terrible draw of being in a group with Kelly & Matt, two I would pick as favorites based on their Power Puzzler Scattergories. Sorry for the rest of you, but I don’t know if I’ll be having a losers bracket. It’d be nice to cut the preparation/judging time by 10 people for the next round. We’ll see.

So what did we all think of the powers? The protections were often used to good effect on doubles or categories where the answer would likely all be the same. The copycats were hit and miss, the bombs were as well. The funniest being when Nibbish blew up a category where all his opponents cancelled each other out with the exact same answer.

I am floored that less than half of you used the Time Extension. There were 3 people who didn’t use any powers at all. A lot didn’t use them all or only used a few. Timer had a factor in that?

Mad Props
Kelly: Was the only one to solve all three special clues
Dean: Had one of the highest scores and won his group without using any powers.

We Three Kings was a toss up for benefit. You could score multiples on a couple song titles with Ws here. A few of you answered correctly, but did not place your answer in a category. Several of you answerd “nestling” which I assume was because of the clue, which is also a good answer. 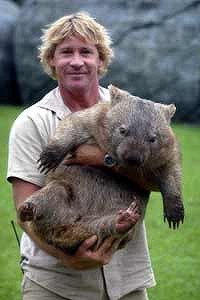 This is a wombat.

Next round will come out when I get to it. If those who didn’t advance are really clamoring to play in a losers bracket, you’ll have to let me know.